Understanding the Importance of Prognostication in Rehabilitation

Prognostication is one of the most important skills to have as a medical practitioner. In the context of neurorehabilitation, it refers to the ability to predict the impact of rehabilitation (and other) interventions on functional outcome, as opposed to, for example, predicting life expectancy.

There are predictive tools, however current algorithms lack the necessary data and evidence to be sufficiently accurate in predicting level of disability, so the art of prognostication remains largely dependent on clinical assessment.

The following cases highlight how outcomes of rehabilitation can vary significantly between and within individuals, surprising even the most experienced of clinicians.

I first met “Sandra” over 3 years ago when I was asked to assess her in the neurosurgical ward after being transferred from the Neuro-ICU. Thus begun a journey that continues to this day, illustrating the challenges and rewards of working in the specialty of rehabilitation medicine. I recall seeing two patients that day with aneurysmal subarachnoid haemorrhage. The other was “Leah”, a 69-year-old female transferred from another hospital with a Fisher grade 4, WFNS grade 5, SAH with a GCS of 3, due to a ruptured aneurysm arising from the right middle cerebral artery bifurcation with associated intracerebral and intraventricular blood. She underwent clipping of the aneurysm, subsequently required a VP shunt for hydrocephalus, and intraarterial therapy for moderate cerebral vasospasm. Four weeks after admission, she was still drowsy, was only able to follow simple instructions, had weakness in her left leg more than the arm, demonstrated neglect of her left side, and still required full nursing care including a hoist to lift her out of bed.

At this point, I agreed she would benefit from inpatient rehabilitation to reduce her burden of care and improve her quality of life in the longer term but felt she had limited prospects to return to independent living. I arranged admission to MetroRehab Hospital, with the expectation of at least 6 weeks as an inpatient. Needless to say, she exceeded expectations and was home after only 3 weeks, independent with mobility and self-care, less than two months after her subarachnoid haemorrhage and subsequent lifesaving neurosurgical interventions.

And then Sandra, a 43-year-old female, found at home by her flatmate, with a ruptured anterior communicating artery aneurysm resulting in widespread subarachnoid and frontal intraparenchymal haemorrhage, with intraventricular extension, Fisher 4, WFNS 4, GCS 7 on admission. She had emergency surgery for clipping of the aneurysm and insertion of an external ventricular drain, developed moderately high-grade vasospasm in her anterior circulation bilaterally, treated with intraarterial therapy. The EVD was removed after two weeks when hydrocephalus resolved. I saw her the day she came out of ICU, three weeks after admission, and she was transferred to MetroRehab Hospital a few days later, on the same day as Leah.

Moving forward, after four months of intensive inpatient rehabilitation, five months after severe SAH, she was finally discharged from hospital.

At this stage, she remained largely non-verbal with a severe cognitive impairment, needed the assistance of two staff to transfer, and required assistance with all ADLs due to motor impairments in all limbs, particularly on the right, where she had received botulinum toxin injections for muscle overactivity.

The National Disability Insurance Scheme (NDIS) had only just been rolled out in Sydney at this stage, and we were able to get her approved for this new scheme. Despite this, it was agreed that she would be better served temporarily moving into an aged care facility providing high level care, with regular physiotherapy onsite, rather than one of the recently opened disability group homes funded by the NDIS.

However, three months after discharge from MetroRehab, and eight months since her SAH, and despite intensive outpatient physiotherapy, she had developed a flexed right knee that was not able to be straightened, with an associated pressure ulcer in her popliteal fossa. Many would call this a fixed flexion contracture, a term I generally try to avoid due to the implications on reversibility. In the interim she had developed evidence of hydrocephalus on imaging. I referred her back to her neurosurgeon and eventually proceeded to VP shunt insertion. However, this was postponed by several months due to the development of an extensive DVT in her right leg, precipitated by the severe spasticity causing immobility in that leg.

In the meantime, I readmitted her to MetroRehab for intensive inpatient rehabilitation and further botulinum toxin injections, resulting in a significant improvement in the knee deformity from being flexed to 80° at the nursing home, to 20° by discharge.

As a result, her mobility significantly improved during this second shorter admission. She was now able to stand with assistance, and could mobilise short distances with a FASF, albeit toe walking with a flexed knee due to overactivity in her knee flexors and plantarflexors. On return to the aged care facility, a mechanical lifter continued to be used as the safest option for staff to transfer her.

It took us a further four rounds of botulinum toxin injections into her calf and hamstrings, over the subsequent 12 months, coming in and out of various rehabilitation programs including multiple brief inpatient admissions and day program attendances at MetroRehab, with the use of various splints and casts on her leg, and outpatient physiotherapy at the nursing home, for her to improve to the point of being able to walk independently, with only a slight limp. Over the same 12-24 month period, she continued to gradually improve cognitively and functionally, and with further rehabilitation, she was able to physically perform ADLS with the use of both arms and speak in full sentences with emergence of her infectious personality, albeit with ongoing memory impairment.

Without targeted spasticity management and intensive rehabilitation, she would undoubtedly now be bedbound with limb contractures and requiring full nursing care, having “plateaued” after six weeks of rehabilitation.

In 2020, three years since her initial presentation, partly due to COVID-19, she has moved out of the nursing home into the care of her family. She continues to improve cognitively, is running up and down stairs, is considering moving into a group home for people with disabilities appropriate to her needs, and in the longer term is considering some form of employment, with the assistance of the Royal Rehab Brain Injury Community Rehabilitation Team.

The staff at MetroRehab and Royal Rehab are ideally placed to navigate the complex interface between the health and disability sectors.

This need is highlighted when patients, like Sandra, do not fit neatly into an existing model of care, necessitating the use of creative strategies to gain access to the rehabilitation that they require and deserve.

Even if someone has been given an unfavourable prognosis, it is never too late to revisit the question of whether rehabilitation may be of benefit, especially as options for pharmacological management and evidence for new technologies emerge.

Click here to read the latest issue of Rehab Matters 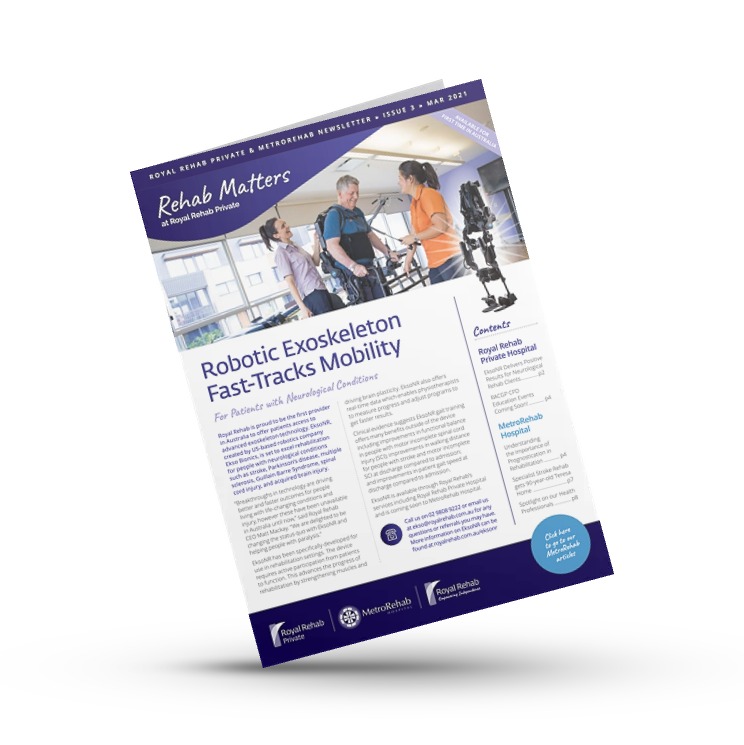